A Star On and Off the Racetrack

A Star On and Off the Racetrack

Brazilian Driver Brings Her Well-Earned Fame to the All-Female No. 57 Caterpillar Car

She’s a YouTube star, host of a television auto show and an entrepreneur involved in a ride-sharing startup pairing women passengers with women drivers. Oh, and she just happens to be one of the most accomplished female racecar drivers of the past two decades.

Now, this woman who’s famous enough in her home country — much like fellow Brazilians Pelé and Ronaldhino — to go by just a nickname is bringing her talents to the No. 57 Caterpillar Acura of Heinricher Racing. Get to know the driver known in international race circles simply as “Bia.”

A native of São Paulo, Brazil, Ana Beatriz Caselato Gomes de Figueiredo was born to parents whose careers couldn’t be further from the racetrack — her father is a psychiatrist and her mother is a dentist. Still, something about cars captured young Bia’s attention.

“I was born a different girl somehow,” she says. “I liked to do energizing things — play sports, play with the guys — but I liked dolls as well. I put the dolls in the cars and raced them.”

When Bia was 8, her father took her to a track in their hometown and she fell in love with the go-karts.

“I was lucky coming from a ‘macho’ country that I had parents who allowed me to go racing,” she says. “I started running races in Brazil and it’s just never ended.”

Speed Round with Bia Figueiredo

Last TV show you binge watched? Can it be a movie? I did just watch Bohemian Rhapsody. I love Queen.

Pre-race meal? Lots of carbs — usually pasta or a sandwich

Post-race meal? I’m not really hungry after a race — maybe a banana, some fruit, some snacks. Usually I’m really thirsty, so I drink a lot of water.

Any superstitions or good luck charms? I like to pray. It gives me focus. I also tell myself not to forget to have fun driving.

Beach, mountains or somewhere else? Beach

Most daring thing you’ve done outside of racing? I jumped out of an airplane. My parents wanted to kill me. I was challenged to do it, and I never back down from a challenge. I did it with my husband, but I wouldn’t do it again!

If you weren’t a racecar driver, what would you be? Something with sports — maybe a tennis player? Or I would be a driver somehow, in a taxi, for Uber. I love to drive! I’m involved in a company in Brazil that’s pairing women drivers with women passengers. It’s been great experience as an entrepreneur. 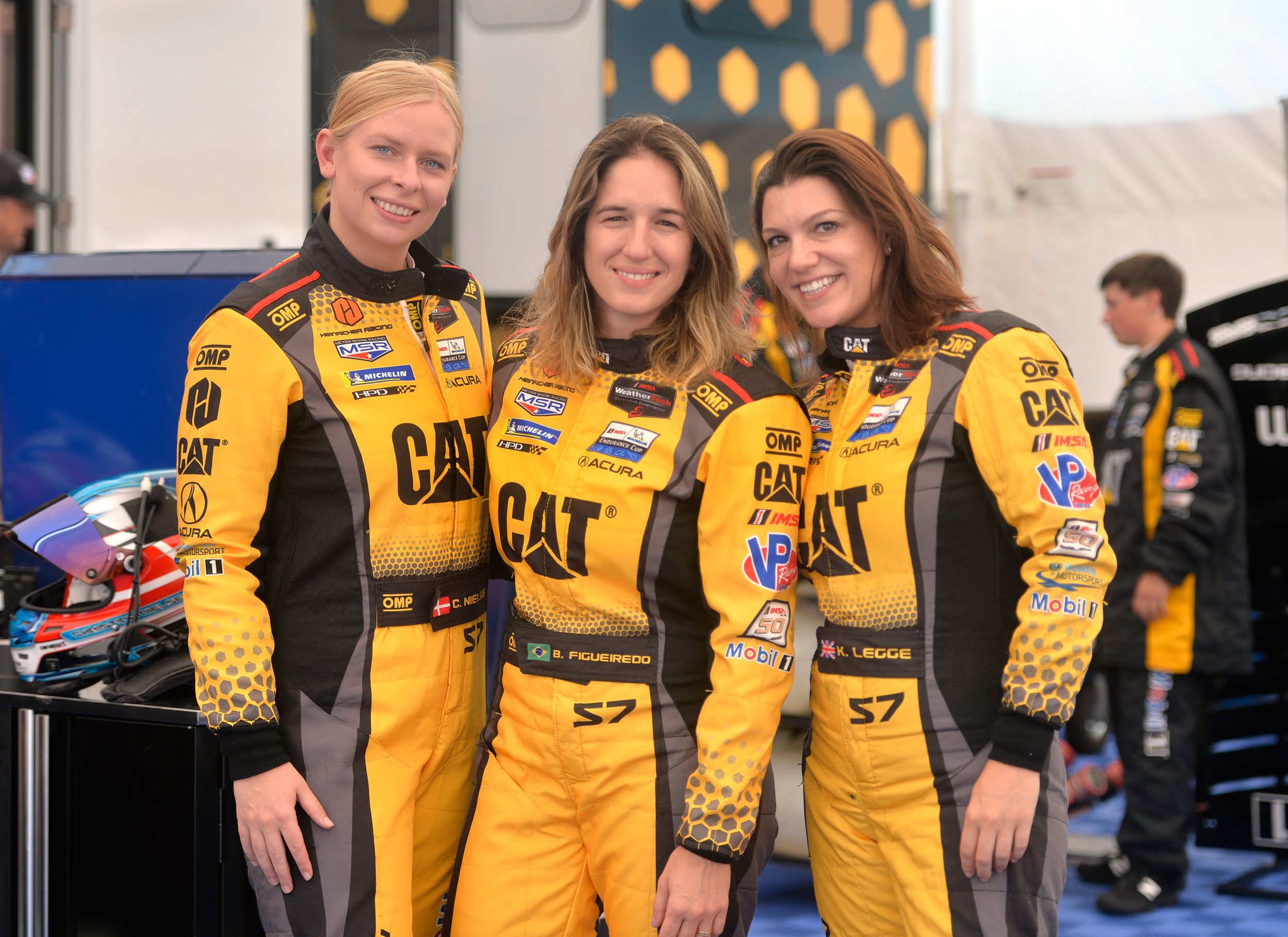 Never ended, indeed. After getting her start in go-karting, Bia debuted in Formula Renault Brazil in 2003, where she earned Rookie of the Year honors and two years later became the first woman in the world to win a race in that series. (She continued racing while earning her business degree from Centro Universitário das Faculdades Metropolitanas Unidas in São Paulo in 2006.) In 2008, she moved up to Firestone Indy Lights — and in another series first for a female, won a race that July.

From 2010 to 2013, Bia ran partial seasons in IndyCar, becoming the first Brazilian woman to make the grid and race the Indianapolis 500. For the past five years, she’s raced in one of South America’s most prestigious series, Stock Car Brasil, running alongside Formula One drivers Rubens Barrichello, Ricardo Zonta, Antônio Pizzonia and Luciano Burti.

“Imagine 26 years in racing — there are a lot of memories,” Bia says. “Of course, you always remember the wins, and I have more than 40 of them. But in racing, you lose more than you win, and that’s great experience for life. Bad days on the track helped me mature and learn how to deal with bad days in life.”

Even with all those years of experience on the track, Bia acknowledges she’s still learning — particularly since competing in the International Motor Sports Association (IMSA) WeatherTech Sports Car Championship represents a new type of racing for her.

“I don’t have experience in endurance racing, so I’m trying to get as much from Katherine [Legge] and Christina [Nielsen] as possible,” Bia says of her fellow Heinricher Racing drivers. “I’m paying a lot of attention to the details and rules that are different to me, and physically I’ve had to change my training — longer runs, more repetition, more weight training.”

Bia knew Katherine and Simona de Silvestro, another driver for the No. 57 Caterpillar Acura, from her days in IndyCar, and that’s one of the reasons she jumped at the chance to join the all-female lineup assembled by team owner, racecar driver and entrepreneur Jackie Heinricher.

“I knew how competitive Katherine and Simona were, and then Christina came on board,” Bia says. “This is a group of really brave women who are doing something serious, and I wanted to be a part of that.”

When Caterpillar joined the effort as the primary sponsor of the No. 57 car, Bia realized this was a one-of-a-kind opportunity to showcase the talents of female drivers.

“This is a huge company, and I don’t see another name as big as Caterpillar anywhere else in the paddock,” she says. “They see us as role models, and we need to make them proud.”

Putting fame to good use

Caterpillar isn’t alone in viewing Bia and the Heinricher Racing team as role models. Over the course of her career, Bia’s emerged as a celebrity in Brazil. In addition to her role as a TV presenter, she hosts her own YouTube channel, where behind-the-scenes videos from the racetrack and her personal life have garnered half a million views. She also has more than 116,000 followers on Instagram and another 41,000 on Twitter. But it’s not fame that motivates Bia or her teammates.

“We want to do well to send a message to other women and girls: If we can do it, you can do it,” she says. “If it’s your dream to be an engineer, a scientist, a driver, just work really hard and never give up. I want to show all the women out there that if you believe in yourself, you can reach your goals.”

Despite all she’s already achieved on and off the track, Bia’s not backing down on setting big goals for herself — even though the hard work and travel of the race season take her away from her husband, family, friends and the boat she loves taking out on the water near her Rio de Janeiro home.

“My goal is to win as many races as I can,” she says. “As a team we are united in our goal to get on the podium, and I will always do my best to win the next race. I am a really determined person — I like to work and I love what I do.”

It shows — every time the woman famous as “Bia” gets behind the wheel.

Follow Bia Figueiredo and the rest of the No. 57 team in their quest for the 2019 IMSA WeatherTech Sports Car Championship on CatRacing.com. 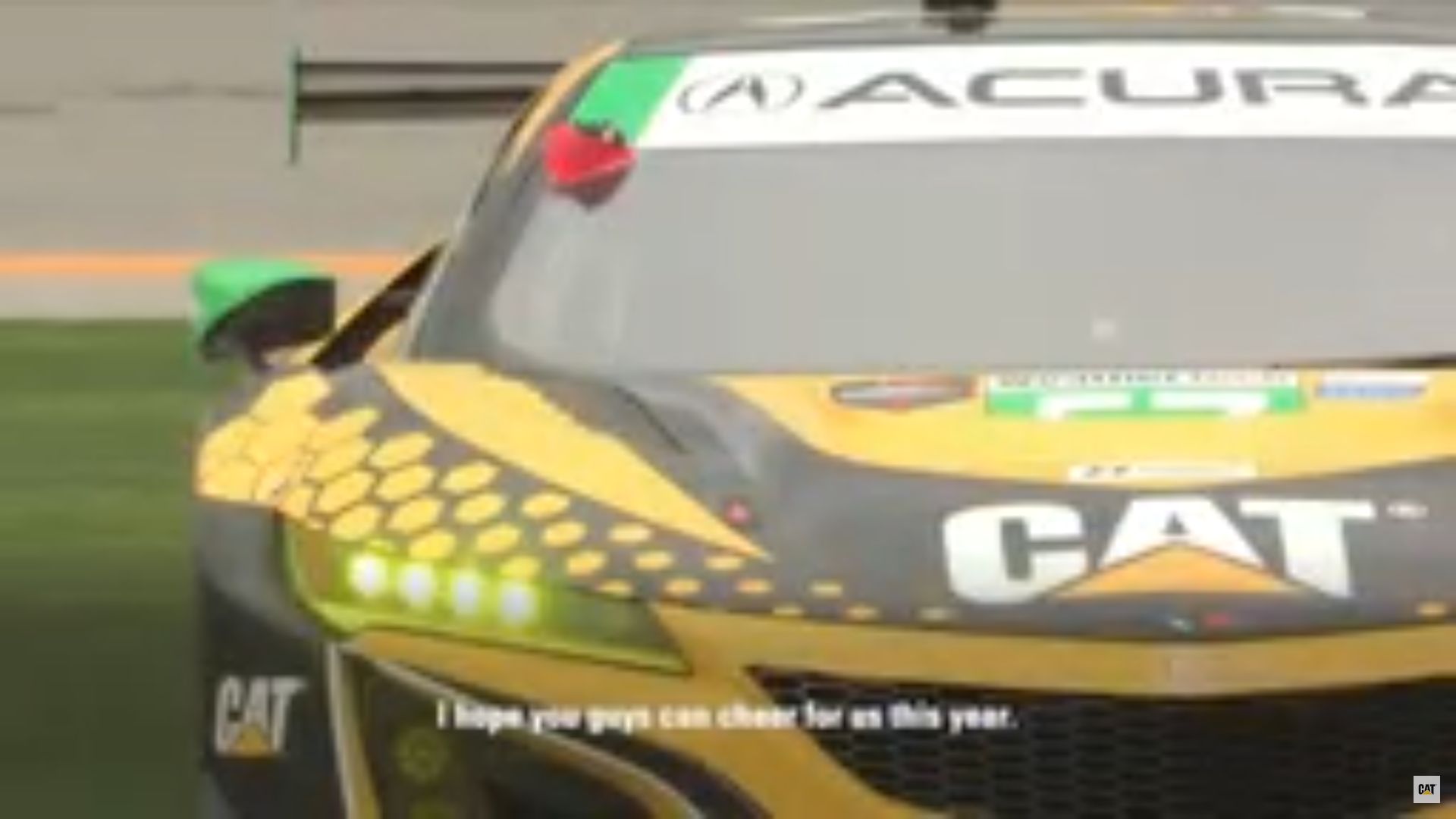