IMSA Behind the Scenes

All-Female Driver Lineup is Ready to Compete, Win and Prove that Women Can Do Anything

No one understands the challenges of breaking into a “man’s world” better than the women who will take the wheel of the No. 57 Heinricher Racing Acura NSX with MSR race car, sponsored by Caterpillar, in 2019. They represent the first all-female driver lineup to compete for the International Motor Sports Association (IMSA) WeatherTech Sports Car Championship.

Combined, the women bring decades of experience and plenty of success in professional race car driving, but it hasn’t always been an easy path, and the racing industry remains one dominated by men. They’re hopeful this effort — put together by scientist, entrepreneur and racer Jackie Heinricher — will help show the world that women can compete on equal terms with men.

“These are the top four driving women in the world coming together for the first time,” Jackie says. “To do that with the Cat logo on the car and the support of Caterpillar behind us is extraordinary.”

“I often get the question, ‘Why aren’t there more women in racing?’” says Christina Nielsen, a native of Denmark who was the first female driver to win a WeatherTech Sports Car series title. “It’s something that’s going to be hard to change, but an effort like this creates a lot of attention. We love being a part of the change, and we love that Caterpillar is sharing that vision with us.” 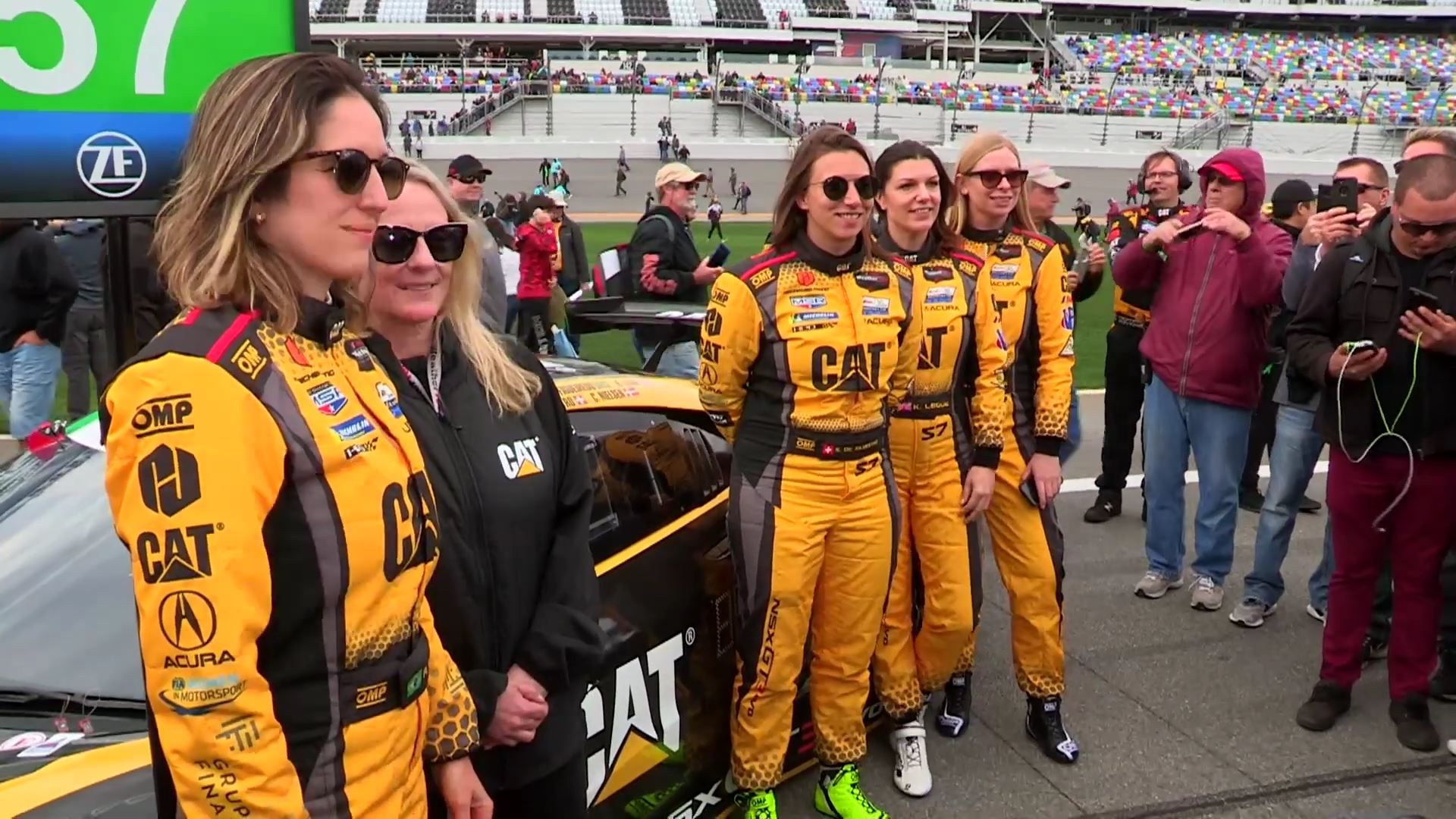 Competing for the WeatherTech Championship, IMSA’s flagship series, is a big deal for any driver — regardless of gender. Reaching the pinnacle of racing requires long hours, lots of travel and years spent moving up through the ranks. All of the women credit their families for supporting their early dreams.

“I was lucky that my parents gave me the chance to explore racing,” says Simona de Silvestro, a Swiss driver who’s taken several podiums in IndyCar. “It’s maybe not the first sport a girl goes into, but they were supportive and let me try things.”

Bia Figueiredo feels the same. “Coming from a macho country, I was lucky to have parents who allowed me to go into racing,” the native of Brazil says. “When I started, people would say, ‘Girls can drive? Girls can go to IndyCar?’ We didn’t have many back in the day. People would doubt. Something that hurt me a lot was that the prejudice would come from other women, even more than from the guys.”

Dealing with the doubt and discrimination requires a strong support network.

“I’ve had some really influential people in my life — team owners and friends who have helped me,” says British driver Katherine Legge, who owns 15 podiums, six race wins and three championships. “I wouldn’t have got here without the support of all those people. You have to pick your role models.”

A New Generation Is Watching

Speaking of role models, the drivers recognize that’s what they’ve become for a new generation of girls and young women — not just those interested in racing and sports, but also those considering careers in science, technology, engineering and math (STEM).

“I personally want more young girls to get involved in science. I want to see more female engineers, because one of the best race engineers I ever worked with was female,” Katherine says. “I know it’s tough because it’s daunting going into an industry dominated by men. But if you want something badly enough you will find a way to make it happen.”

Simona, Christina and Katherine (who is a STEM Ambassador for the Girl Scouts) regularly speak to young women about careers in STEM and what it’s like to pursue a path outside the norm. Jackie delivered the keynote address at the Caterpillar Women’s Initiative Network’s sixth annual Introduce a Girl to STEM Day last fall.

Bia recently began mentoring a 12-year-old girl who wants to become a professional race car driver and is also involved with a ride-sharing start-up in Brazil that will pair female passengers with female drivers.

“If it’s your dream to be a driver, an engineer or a scientist, just work really hard, be determined, never give up, and you’ll be able to reach whatever you want to do,” Bia says.

The Goal Is a Championship

Being the first all-female team to compete at IMSA’s highest level is an honor for the drivers. But simply competing isn’t the goal — winning a championship is.

“This is not just some gimmick. It is a serious project, and we are drivers who are here to win,” Christina says. “What we all are is drivers first, women second. Our resumes speak for themselves.”

Katherine agrees. “We’re four of the best drivers you could have chosen regardless of anything else.”

Keep track of the No. 57 car’s progress during the 2019 WeatherTech Sports Car Championship at CatRacing.com.

They’re smart, talented, super fast on the racetrack — and they just happen to be women. Learn more about the drivers of the No. 57 MSR Acura NSX GT3 car, sponsored by Caterpillar.

Keep tabs on race results, check on upcoming races, go behind the scenes and check out the latest events and promotions.